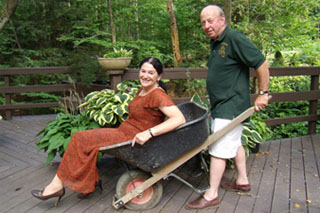 Mike Shadrack is President of the Western New York Hosta Society and has been a member of The American Hosta Society, the British Hosta and Hemerocallis Society, and their executive Bulletin Editor. He serves on the Board of Garden Walk Buffalo Niagara and is chairman of their Events Committee.

Mike has been growing Hostas since 1986 and hybridizing almost as long. His other hobby, fish-keeping, led him to see the beauty of Hostas reflected in the garden pond and now he has many more Hostas than fish in his gardens in Western New York where, with his wife Kathy, he maintains a large collection of modern cultivars and a garden devoted to small Hostas.

In 1996, Mike retired from London’s Metropolitan Police after thirty two years which included serving at Scotland Yard.  He is a qualified London Tourist Board Guide and has organized garden tours both in England and specialized Hosta tours in the US.

His hobby of photography led to a library of about 8,000 images of Hosta varieties and Hosta gardens, many of which have been published in UK and USA catalogues and magazines. In addition, he supplied the illustrations for the Royal Horticultural Society, Wisley handbook Hostas. He is co-author with Diana Grenfell and photographer of the book, The Color Encyclopedia of Hostas, which was named the ‘2005 Reference Book of the Year’ by The British Garden Writers Guild. His Timber Press Pocket Guide to Hostas was released in September, 2007. A French book, Les Hostas, was published in early 2007 with Mike as photographer and co-author. In February 2010 Timber Press published a new edition of Mike and Diana’s The New Encyclopedia of Hostas with updated descriptions and photographs of new cultivars. He produced the photos for his wife, Kathy Guest Shadrack, in her book, The Book of Little Hostas, 2010.  Their Smug Creek Garden is open to visitors in July in Hamburg, NY.

Mike is now the Hosta expert at-large for Bowden Hostas in Devon, England, the UK’s largest hosta supplier. Through their web site at Bowdenhostas.com Mike is available to answer your Hosta questions. Mike is on Facebook and at smugcreekgardens@gmail.com.  Mike has also had a Hosta named after him by Bob Kuk from Kuk’s Forest Nursery which came from H. ‘Rock and Roll’ and H. ‘Great Expectations’. We expect to have a great time when Mike rolls into Memphis in October.

ADMISSION:  Free to Mid-South Hosta Society members and $ 5 for visitors