The Memphis Horticultural Society presents its 2nd Annual Rare Plant Auction.  Join us Tuesday, March 6, at 6:00 p.m. in the Goldsmith Room of the Memphis Botanic Garden for a lively silent auction of rare and unusual plants.  Appetizers, cash bar and entertainment too!

Members are free and guests are $5.00

I’ve been told by several that they don’t know what a rare plant is or rather they don’t have any rare plants. With enough marketing just about anything can be rare. This past spring we needed a vine that was fragrant and convinced ourselves that honeysuckle was rare and worthy (it has since been pulled out and destroyed). At last year’s first Rare Plant Auction, the plant to bring the highest price was a polka dot begonia. Most of us were amazed that there would be a bidding war over a begonia. So I have concluded that a rare plant is one that you want but is hard to find in the trade. There are several things I’ve been looking for — for years. Most of them are sentimental 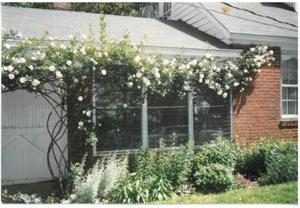 childhood plants that I would like to see again — flowering almond shrubs, Amaryllis johnsonii (the first hybrid amaryllis that is hardy to our area) and more.  There is the unknown climbing rose that grew in the vacant lot next to my first home on Princeton that I dug up and gave to my mother in Corinth and she grew it along her garage trellis (pictured at right). How about the Meyer lemon that so many Memphians have and share the fruit.  Yet another is Chinese Snowball Viburnum or Viburnum macrocephalum which I first saw in Buff Adam’s yard and then finally found it at Dabney’s during Spring Fling. I bought two and they have now outgrown their places and will be root pruned and moved this spring.  So you see, rare may even mean covetous!

But the ultimate rare plant for me is Smilax smallii, or Jackson Vine (pictured at right).  This is not your nasty cat brier. Everyone is Corinth who had a baby girl grew Jackson Vine for her wedding 20 plus years later. It is evergreen, has thorns on the lower stalks only, and has 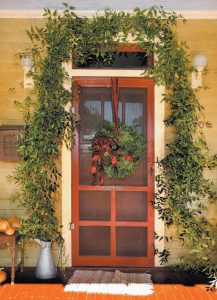 got to be the most beautiful vine in the world-all year long. I did a program in Corinth 3 years ago and they asked me what I charged. I told them a Jackson Vine. (You can ONLY get it as a pass-along as it grows from a potato like tuber that gets to be gigantic.)  I did some research on it for a plant list for a Florida development I was working on and it is on their endangered list because of the cutting from the wild and shipping North for weddings. I am now a proud owner of this prized, rare vine. I wish it were big enough to cut up and offer at this year’s MHS Rare Plant Auction, but alas, it is not.  But in a few more years I will have some to offer. Until then you will see some of my other favorites.  Maybe that’s what we should have called it: The Favorites Auction.

As a member you should bring an appetizer to share and come to the Auction and bid.  The money goes for a good cause: education and programming for MHS.   It’s a lot of fun and you might find that special something you’ve been looking a lifetime for—just not my Jackson Vine.